During a time when hope was hard to come by and much of rural America was suffering, an idea was born in a back room of Will McPeters’ furniture store in Corinth, Mississippi.

By the early 1930s, The Great Depression had devastated much of rural America. Banks were closed. Foreclosures were common. On a single day in 1932, almost 25% of all the land area in the state was auctioned for unpaid taxes. The low price of cotton offered no hope of improvement for the agriculture-based economy of Alcorn county. Kerosene lamps and wood burning stoves were the way of life for most families, and electricity was an unattainable luxury.

While rural electricity at this time was unheard, a group of community leaders including Ben Liddon, a Corinth banker, and farmer Delphus (Dee) Crow, Sr. (whose grandson, John, is employed at Alcorn County Electric Power Association) were interested in improving the economy by bringing power to Alcorn County. By working with the Tennessee Valley Authority that had just begun producing cheap hydroelectric power, the two were able to garner community support and begin the Alcorn County Electric Power Association, America’s first rural cooperative.

“It was the greatest thing in the whole business, bringing electricity to those people. We wired the houses, brought out the appliances, put in the meter, with the families crowded around waiting. When the first switch was turned on, they literally cried and shouted with joy.”

The pioneers that led the way back in 1934 were driven by the goals of raising the standard of living in Alcorn County, attracting more business and economic opportunity, and creating an organization that would not only serve the community, but also become a vital part of the community. These are the same goals that guide ACE Power today as we continually strive to bring significant improvements to Alcorn County from investments in the power infrastructure that keep rates low and reliability high to bringing the country’s fastest internet to Alcorn County with ACE Fiber!

Since our beginning in 1934, Alcorn County Electric Power has been a not-for-profit member owned cooperative. Residents of Alcorn County are both our customers and our boss. We are managed and directed by a member-elected Board of Directors. This is important because it means that ACE Power is set up to deliver services for the sole benefit of the community and our residents, rather than a group of stockholders of a distant company. 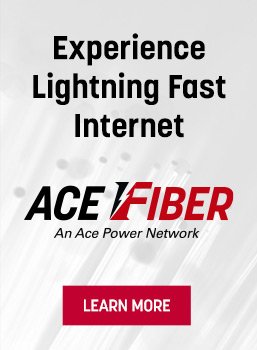